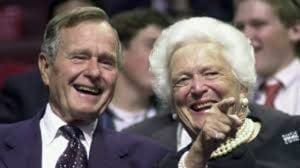 DES MOINES – “.The Iowa Federation of Republican Women says good-bye to Barbara Bush, who is forever in our hearts as a beloved, ever-practical and never-intimidated Republican female role model and was deeply devoted to her family. She was a strong advocate for many causes during her public service as our nation’s First Lady and an inspiration for many,” IowaFRW President Gloria Mazza said in a statement today.

Mrs. Bush, who was first lady from 1989 to 1993 during George H.W. Bush’s presidency, died yesterday at her home in Houston at the age of 92. She and former President Bush were married 73 years.

She was the wife of the 41st president and the mother of the 43rd, President George W. Bush. Abigail Adams, too, had a husband, John Adams, and son, John Quincy Adams, serve as presidents. However Mrs. Adams did not live to see her son take office, leaving only Barbara Bush to have witnessed both her husband’s and son’s presidencies.
National Federation of Republican Women President Jody Rushton said in a statement: “She inspired each of us in countless ways, and when she spoke, we listened. The NFRW has worked with Mrs. Bush on literacy projects for many years, and we will honor her legacy by continuing the important work of the NFRW Barbara Bush Literacy Program.”

The Iowa Federation of Republican Women (www.iowafrw.org), founded in 1939 in Tama County, is the premier organization for uniting the voices and values within the Republican Party, and is part of the National Federation of Republican Women, founded in 1938. The NFRW (www.nfrw.org) is the largest and most influential women’s political organization in the nation, proudly representing the party that first made it possible for women to vote in the U.S. and working to increase the effectiveness and relevance of women in the cause of good government.