Republicans lead fight for voter equity, accountability, then and now 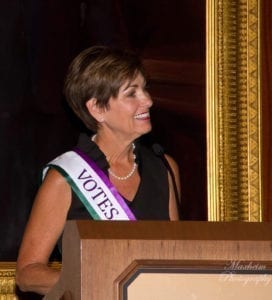 “Our state’s first female governor has proclaimed the month of July Women’s Suffrage Month, 100 years after a special session of the Iowa General Assembly ratified the 19th Amendment to the U.S. Constitution on July 2, 1919,” said Lori Leonard Reyman, Iowa Suffrage Centennial Gala chair and IowaFRW 1st vice president. “IowaFRW is proud to help tell the story of how women won the right to vote in our state and throughout the land.” IowaFRW honored Gov. Reynolds as an Honorary Suffragette at the Iowa Suffrage Centennial Gala, held at the World Food Prize Hall of Laureates in Des Moines on June 22.

While the crowd was moved to multiple standing ovations and women stole the spotlight – the governor, the first female Speaker of the Iowa House Linda Upmeyer, the head of the national Women’s Suffrage Centennial Commission, Women’s Hall of Famers, female legislators, little costumed Suffragettes, and entertainers singing Suffrage songs – it was the story of a boy’s pride in his mother that made hearts swell. That “boy” is the son of one of the first women ever to vote in the state after Iowa ratified the 19th Amendment, and today he is third in line of succession to the presidency.

“Thanks to the Suffragists’ tireless crusade, our institutions of government are held to account by all Americans – both women and men — at the ballot box,” said Senator Chuck Grassley, R-Iowa, President Pro Tempore of the U.S. Senate. “The Founding Mothers of history stitched this legacy for all Americans who would come after them. That includes this senator. I’m a proud son of a Suffragist, Ruth Corwin Grassley.”

An Iowa representative running for U.S. Congress, Rep. Ashley Hinson, who served as Gala master of ceremonies, stated that “as a woman holding elected office, it is not lost on me the importance of the Suffrage Movement. My grandmother was born before women had the right to vote. I am so grateful to the women and men who stood up for my voice to be heard so many decades later. ”

“The most powerful tool we have as citizens is the ballot,” said Paul Pate, Iowa Secretary of State and commissioner of elections. “I want my three young granddaughters to remember that women were not always afforded the same rights as men. It was a long, hard struggle to obtain an equal voice in our society. Hopefully, they can gain inspiration from the women who made it happen.”

Gloria Mazza, IowaFRW president, noted, “We can never fully understand all the struggles the Suffragettes endured as they fought for the right of the woman’s vote, but we honor them and celebrate all they did. Today, because of them, women not only vote, but run for office and like here in Iowa hold the highest elected office in the state.”

The sold-out Iowa Suffrage Centennial Gala “was an uplifting experience,” said Gwen Ecklund, Gala vice chair and IowaFRW immediate past president. “The positive feeling in the hall was a tribute to the tireless work of our foremothers to attain voter equity for generations to come. Personal stories shared from participants’ ancestors were the buzz all evening.”

The Governor’s Proclamation that July 2019 is Women’s Suffrage Month in Iowa reads in part:

“Whereas, Iowa, in a special session a of the General Assembly, was the 10th state in these United States to ratify the 19th Amendment on July 2, 1919, and;

“Whereas, the Iowa Federation of Republican Women (kicked off) the Iowa Suffragette Gala on June 22, 2019, the commemoration of the brave souls who have fought for generations, and will never stop fighting for equality, life and liberty;

“Now, therefore, I, Kim Reynolds, Governor of the State of Iowa, do hereby proclaim July 2019 as Women’s Suffrage Month.”

Rebecca Kleefisch, former lieutenant governor of Wisconsin and executive director of the national Women’s Suffrage Centennial Commission, appointed by President Donald Trump, addressed the Suffrage Gala theme: “We’ll take you back to the days of the Suffrage Movement, and celebrate how far we’ve come.”

“It is clear that Iowans are proud of their history in women’s equality, and it is clear with the legacy of Carrie Chapman Catt and others, that there is so much to be proud of. From the governor to the speaker of the House to all the mothers, daughters, sisters and wives who call Iowa home, the Women’s Suffrage Centennial Commission is impressed with the progress of Iowa women’s contributions in the public square,” Kleefisch said.

The Iowa Federation of Republican Women (www.iowafrw.org) unites the voices and values within the Republican Party, and is part of the National Federation of Republican Women, founded in 1938. The NFRW (www.nfrw.org) is the largest and most influential women’s political organization in the nation, proudly representing the party that first made it possible for women to vote in the U.S. and working to increase the effectiveness and relevance of women in the cause of good government. Its mission is to elect Republican candidates, promote the principles of the Republican Party, educate the public, and inform the media. 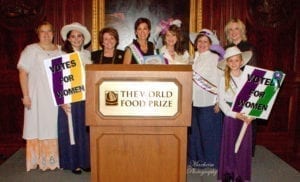